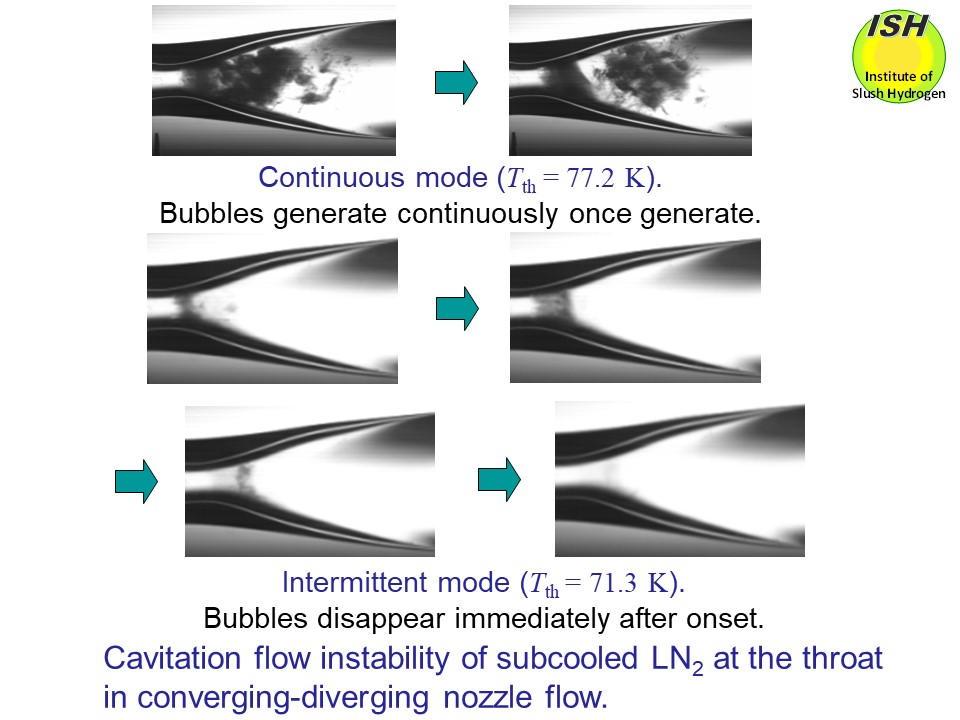 Cryogenic fluids such as liquid hydrogen (20 K), liquid oxygen (90 K), and liquid nitrogen (77 K) are expected for use in a variety of fields, including as propellants for rockets and other aerospace equipment, and refrigerant for superconducting equipment.

Research on cavitation has been carried out at many different facilities. Most of this research, however, has used water and other liquids at room temperature, and there are few detailed reports on cavitation in cryogenic liquids because of the difficulties involved in designing appropriate experimental equipment, and in conducting the experiments themselves.

Cavitation experiments were performed using converging-diverging (C-D) nozzles with a throat diameter of 1.5 or 2.0 mm, and cavitation instability mechanisms for liquid nitrogen under saturated and subcooled conditions were investigated [28, 29]. Considering that throat flow velocity is limited by the speed of sound in a single-component vapor-liquid two-phase flow, the relationship between choked flow phenomena and cavitation behavior was firstly elucidated.
Cavitation was observed to change from continuous mode to intermittent mode when the temperature of liquid nitrogen at the throat was reduced to 76 K, as indicated in the above figure.

At a throat diameter of 1.5 mm, flows were observed that showed the intermittent cavitation continuously occurring during a very short time-period. These flows were accompanied by a very high oscillation pressure of 70 kPa at a temperature of 74 K, as shown in the figure below.

Next, we will look at the results using the speed of sound in a vapor–liquid two-phase flow in a one-component system. The figure below illustrates the relationships among throat temperature, throat flow velocity, cavitation mode, and speed of sound. The curves for speed of sound indicate void fractions of 0.03, 0.06, 0.09 and 0.12. Unlike the case in the two-component system, keeping void fraction constant, each speed of sound curve reaches a peak velocity at around 75 K. In the temperature range less than 74 K, where intermittent cavitation was observed, the maximum void fractions were estimated to be 0.12, 0.09, and 0.06 at temperatures of 74 K, 72 K, and 70 K, respectively, demonstrating that the void fractions decrease as the temperature becomes lower. This trend would tend to make it more difficult for cavitation to occur at lower temperatures, and even if cavitation did occur, the void fraction at the throat would be small in comparison with that under high temperature conditions. This explanation is in good agreement with the results of the visualization tests. As regards the speed of sound in a one-component vapor–liquid two-phase flow, these findings confirm therefore that a choked flow phenomenon occurs during cavitation and suppresses flow velocity at the nozzle throat, and that this in turn causes a change in cavitation mode. 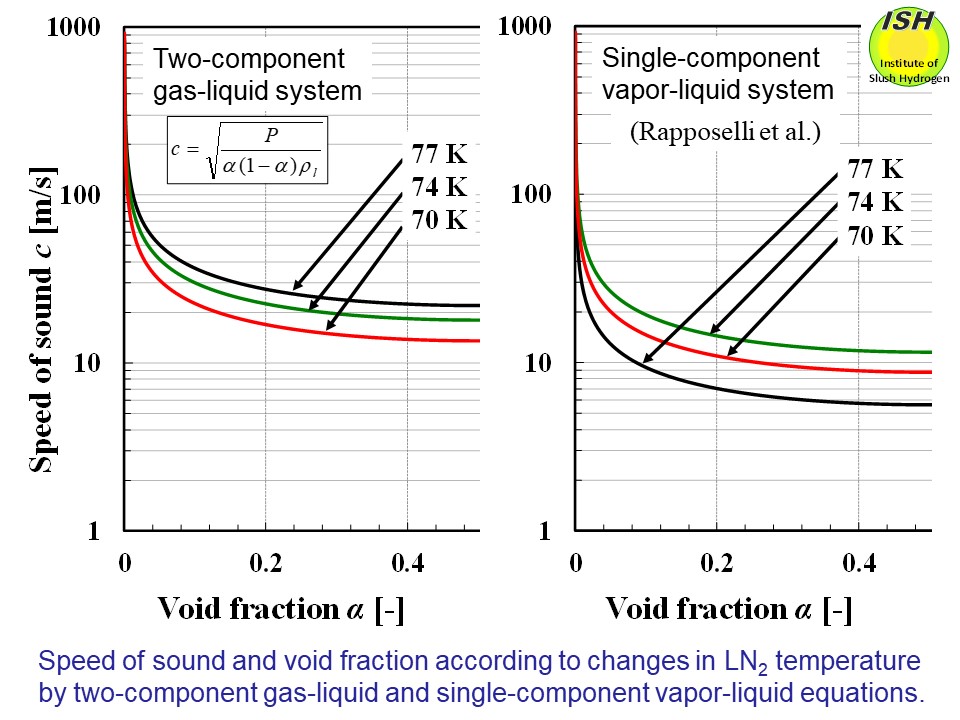 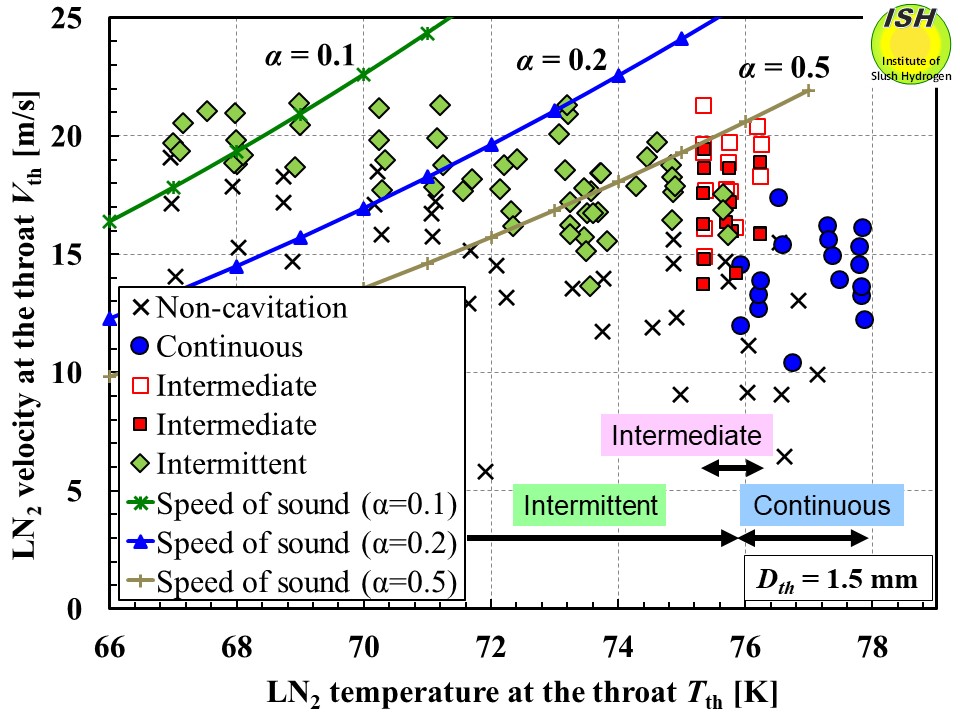 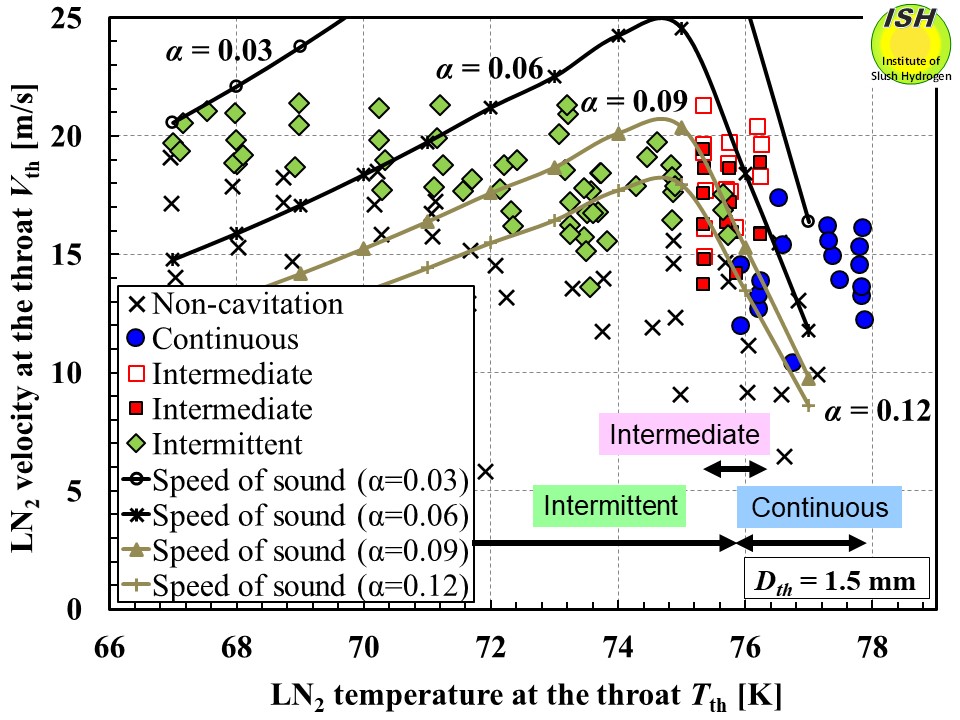 Correlation between oscillation pressure and liquid nitrogen temperature at the throat 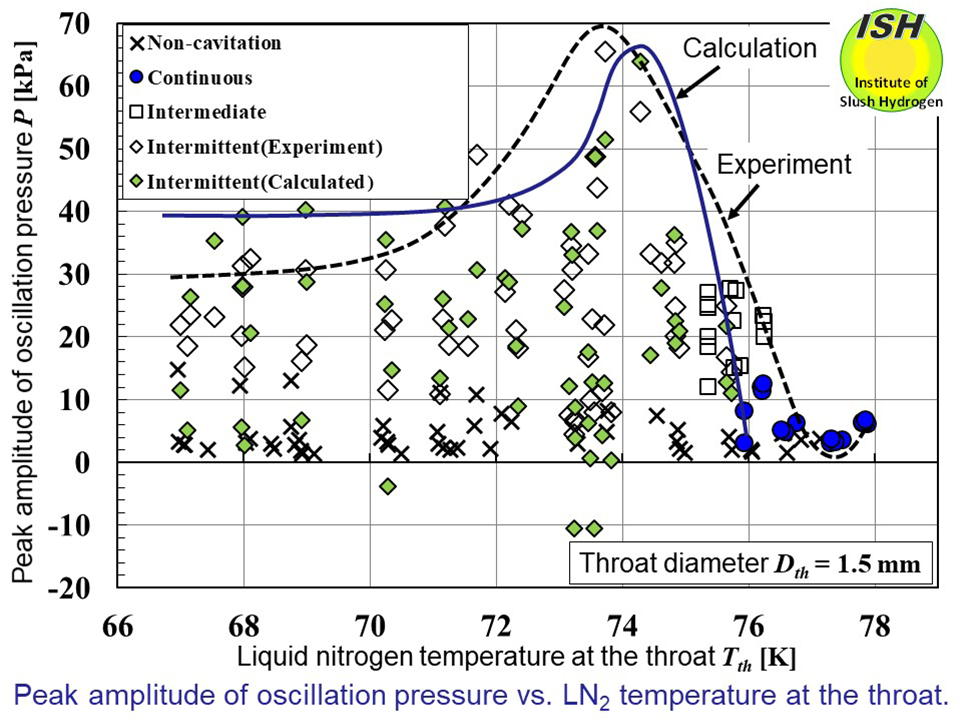