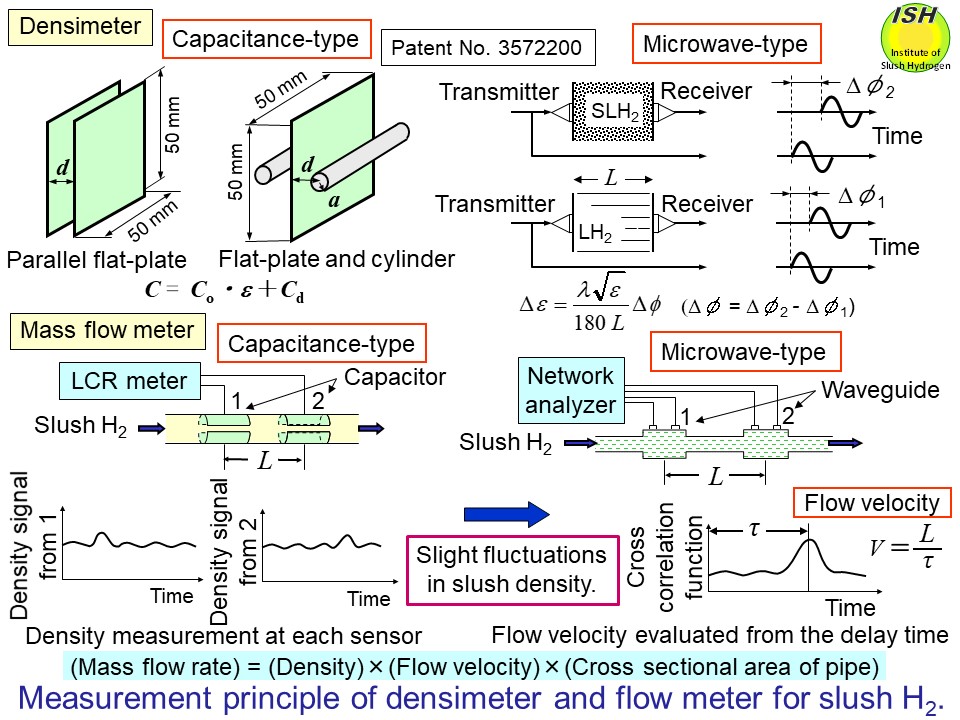 By measuring the fluid temperature, pressure and volumetric flow, it is easy to determine the density or mass flow rate of single-phase fluids such as liquid hydrogen. However, for slush hydrogen, because density varies in accordance with the solid fraction, it is necessary to measure the solid fraction directory.

Regardless of the method being considered, the influence of solid particles on density and flow velocity measurement must be clarified to improve measurement accuracies. Given the objective of high accuracy in density and mass flow rate measurements, new densimeter and mass flow rate meter structures are considered. These approaches are based on changes in the specific dielectric constant, or changes in the microwave propagation properties, due to variation in the solid fraction [14, 15, 16].

High-accuracy densimeter for slush hydrogen
Capacitance-type densimeter
In the case of solid particles mixed in a liquid, such as with slush hydrogen, it is important to consider the behavior of the solid particles in terms of electrode configuration if the accuracy of capacitance-type densimeter is to be improved.
The above figure illustrates the principles associated with the parallel flat-plate type for single-phase liquid, and the flat-plate and cylinder type for slush [12,16].

A combination design featuring a flat-plate together with two cylinders allows solid particles to easily enter between the electrodes, with a simple construction that offers high accuracy. The relationship between the capacitance C of the capacitance-type densimeter and the specific dielectric constant ε is expressed in the above figure. Here, C0 and Cd are fixed constants measured in advance in liquid hydrogen. The measurement of C for the densimeter placed in slush hydrogen allows determination of ε. The volumetric solid fraction can be calculated from the specific dielectric constants εs and εl of solid and liquid hydrogen, while the density of slush hydrogen can be determined from densities of the solid and liquid. 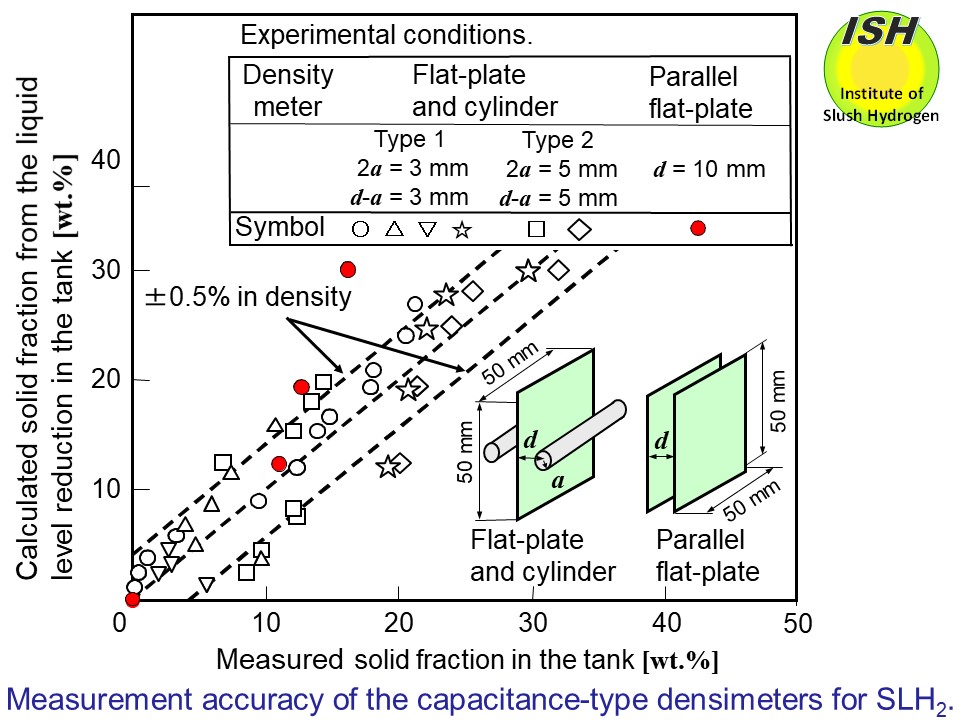 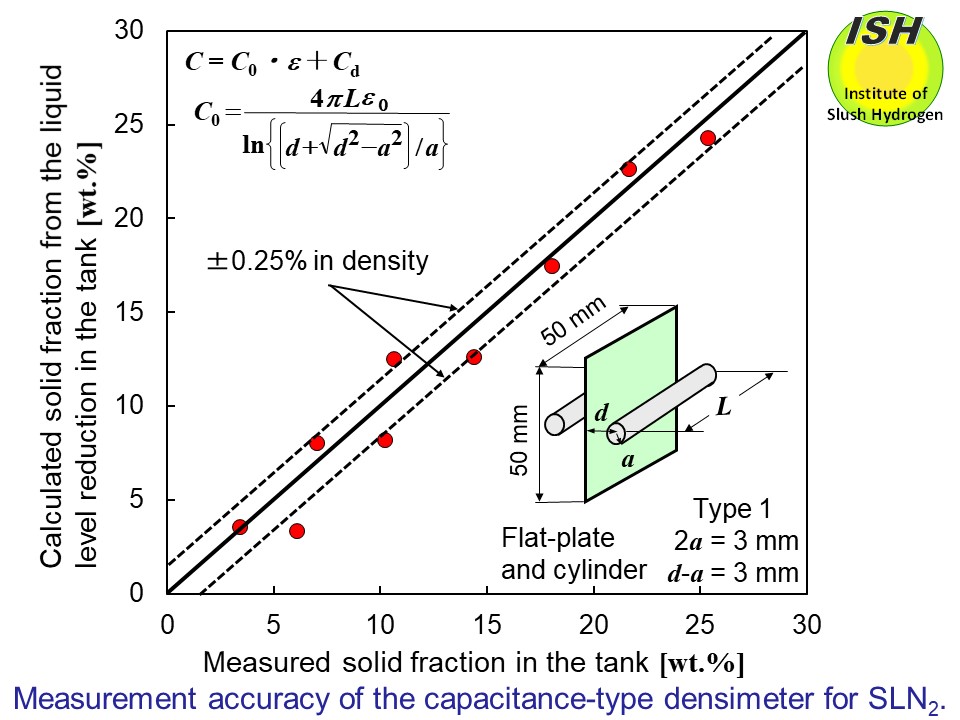 Microwave-type densimeter
The microwave-type densimeter, as shown in the measurement principle figure, consists of micro-wave transmitter and receiver antennas, employing a network analyzer to measure the phase shift in the microwaves propagated between the antennas. This new type has been developed, and the measurement is done with respect to the phase shifts ΔΦ1, ΔΦ2 in the microwaves propagated between the antennas in liquid and slush hydrogen, respectively. The relationship between the phase-shift difference ΔΦ = ΔΦ2－ΔΦ1 and the change in the specific dielectric constant Δε for liquid and slush hydrogen on the other is expressed in the above figure. Here, λ is the microwave wavelength and L is the distance between the transmitter and receiver antennas.

Ellerbruch [50] measured the density of slush hydrogen in a tank using the conventional method with a waveguide and horn antenna. In this method, because the slush hydrogen enters inside the waveguide and horn antenna, there is the disadvantage that the density in the tank cannot be precisely measured. He reports the density measurement error of approximately 2% in comparison to gamma ray measurement results. The figure below illustrates the patch antenna and cryogenic coaxial cable arrangement used to introduce the microwaves [13,16], which is shaped so as to have no opening, thereby eliminating the error that occurred in using the method reported by Ellerbruch. 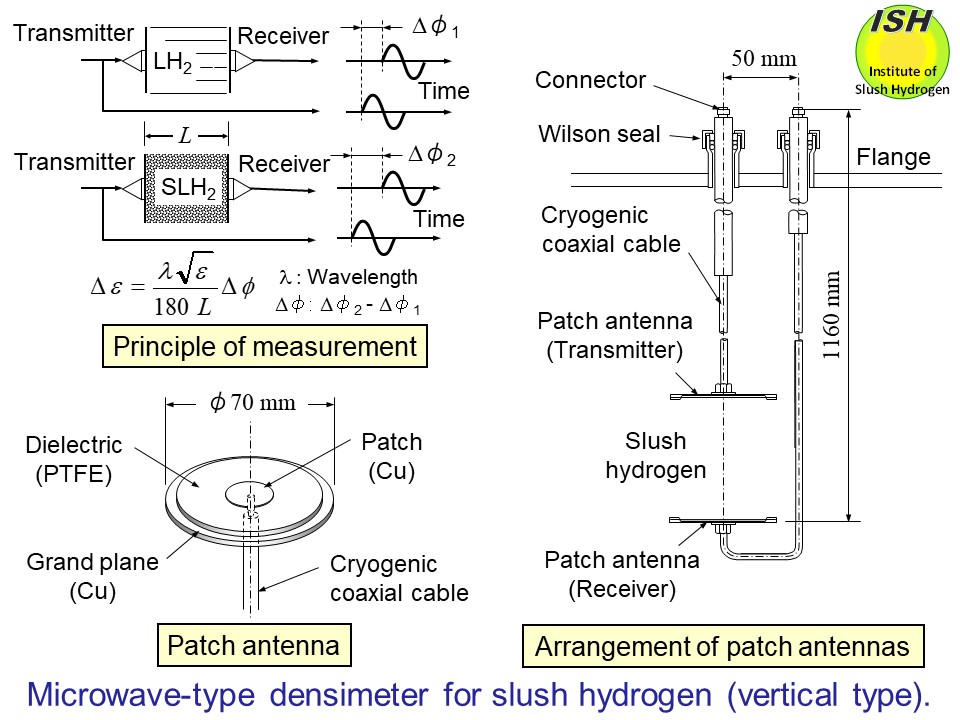 Density measurement tests were conducted in the same manner as for the capacitance-type densimeter [12]. In addition, in order to reduce the reflection of microwaves from the inner wall of the tank, tests were also carried out with respect to the placement of the wave-absorbent material, consisting of polyurethane foam impregnated with carbon. The figure below indicates the comparison of measured solid fraction values with calculated solid fraction values obtained from the reduction of liquid hydrogen. Because the inner diameter of the tank is only 240 mm in the case without the microwave-absorbent material, the densimeter measurement results show a certain amount of measurement error due to the influence of microwaves reflected from the inner wall. This scattering is low in the case where the microwave-absorbent material was used, and the accuracy of within ±0.5% was obtained in comparison with the calculated results when converted to density. 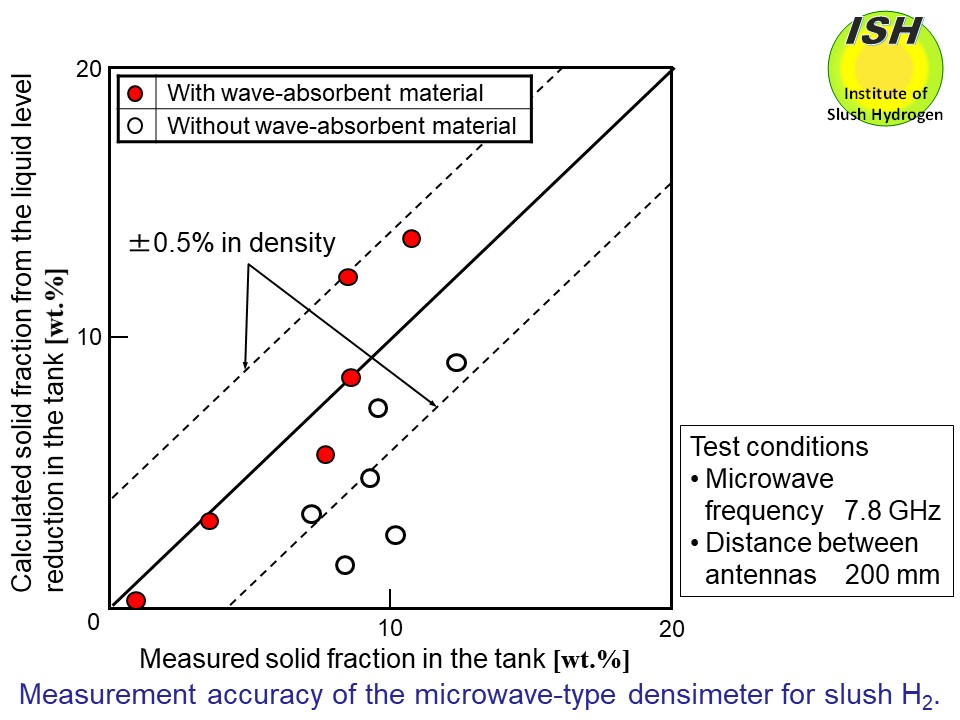 First, capacitance-type and microwave (waveguide) -type densimeters are placed at two locations along the pipe flow, and the density is measured using the LCR meter* and network analyzer, respectively. Then, the flow velocity V is calculated from the delay time τ where the cross-correlation function for the density measurement signals from the two locations is at a maximum, together with the distance L between the densimeters, such that the mass flow rate can be determined.

Since these methods do not utilize any moving parts such as a turbine flow meter, there is no need to install precooling pipes and valves. 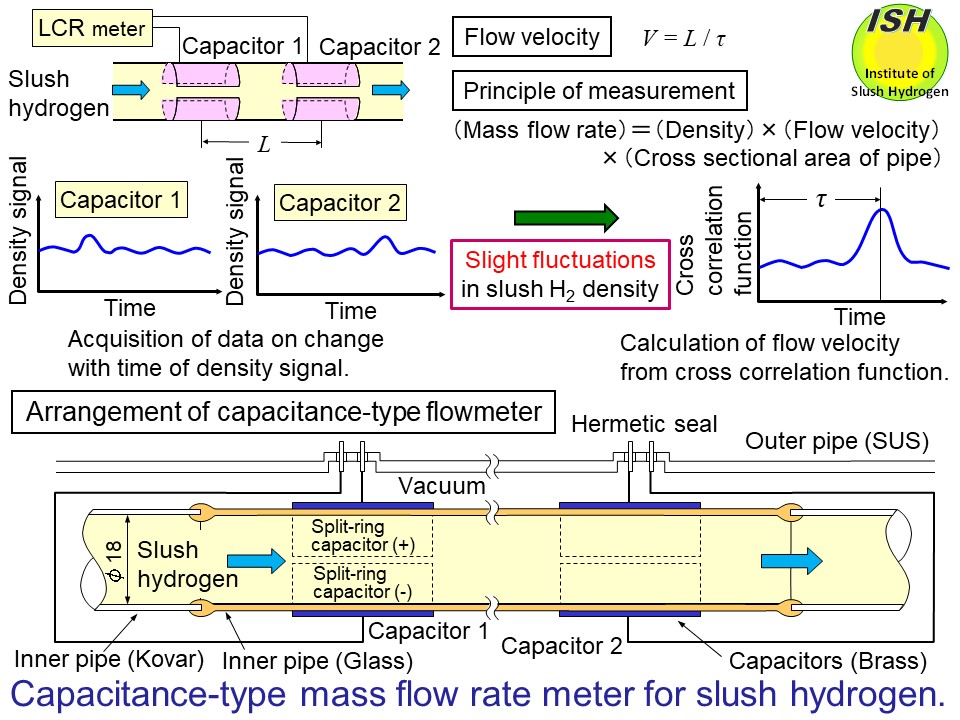 The figure below presents the results of the solid fraction and the flow velocity measured in the tank and those measured using the flowmeter. The number of measurements was low, such that a definitive statement cannot be made, but the following conclusions can be drawn. First, the accuracy of the capacitance-type (flat-plate and cylinder type) densimeter installed in the tank is about ±0.5%. And, as the accuracy of within ±0.5% was confirmed in separately conducted density measurement tests of the flowmeter alone, which are not reported here, the density measurement accuracy of the flowmeter is also estimated to be about ±0.5% from the results shown in the figure below. The results indicated in the figure show a difference of about 10% between the flow velocities measured by the flowmeter in the test section and that calculated from the liquid-level change in the tank of the flow test apparatus, and the main cause of this error is considered as follows. Since the flow velocity measurement error with respect to measurement of the liquid-level change within the tank of the flow test apparatus is estimated to be ±5% at a flow velocity of 1 m/s. Furthermore, the time resolution of the LCR meter used to measure the capacitance of the densimeter was 0.124 s, i.e., the measurement time points cannot be made at closer intervals than 0.124 s. For example, in the case of the delay time of τ = 0.496 s obtained in the experiment, a simple calculation of 0.124/0.496 = 0.25, such that a maximum measurement error of ±25% is predicted. Accordingly, the use of an LCR meter with better time resolution would almost certainly result in improved velocity measurement accuracy. 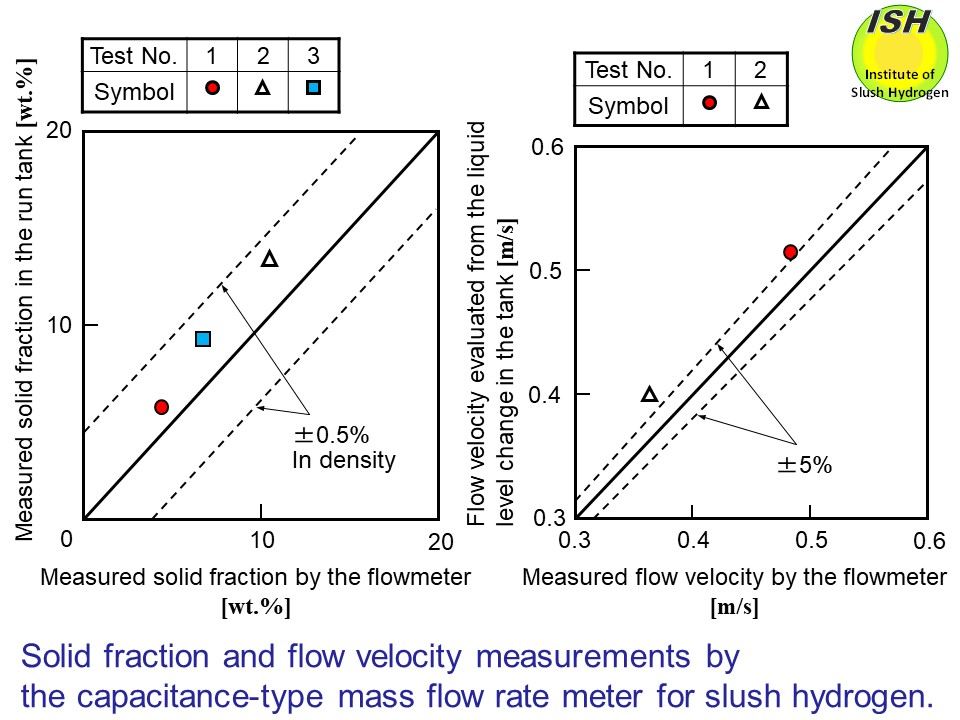 Microwave-type mass flow rate meter
The figure belowillustrates the principle of mass flow rate measurement system using the microwave (waveguide) method [15, 16]. The main structural elements consist of circular waveguides placed at two points on the upstream and downstream slush hydrogen flow pipe (12.5 mm inner diameter) and a network analyzer for waveform analysis. This waveform analysis using the network analyzer allows the calculation of the gain between the signals transmitted and received by the waveguides.
The relationship between the specific dielectric constantεof the medium contained in the waveguide (slush hydrogen) and the frequency fcby which the gain corresponding to the microwave transmission signal passing through the waveguide falls off like a step function (i.e., the cut-off frequency) is as indicated in the figure. The density measurement of slush hydrogen is made possible by the fact that the cut-off frequency changes with the specific dielectric constant of slush hydrogen in the waveguide. Since the difference between the specific dielectric constants of liquid and solid is small at the triple point of hydrogen, the relationship above can be approximated as follows：fc＝C0・ε＋Cd 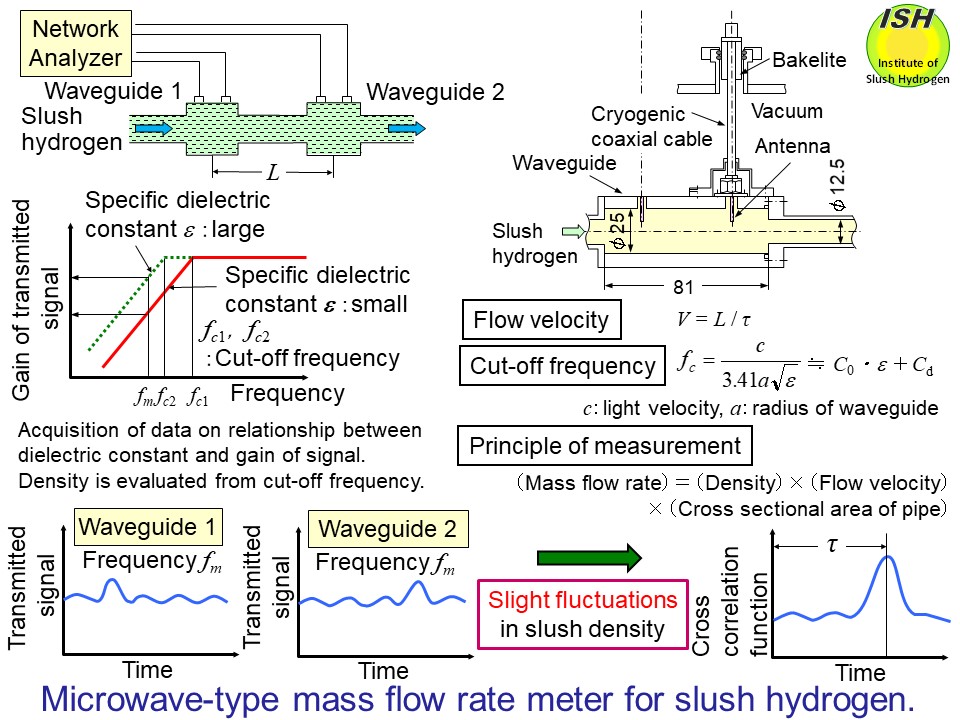 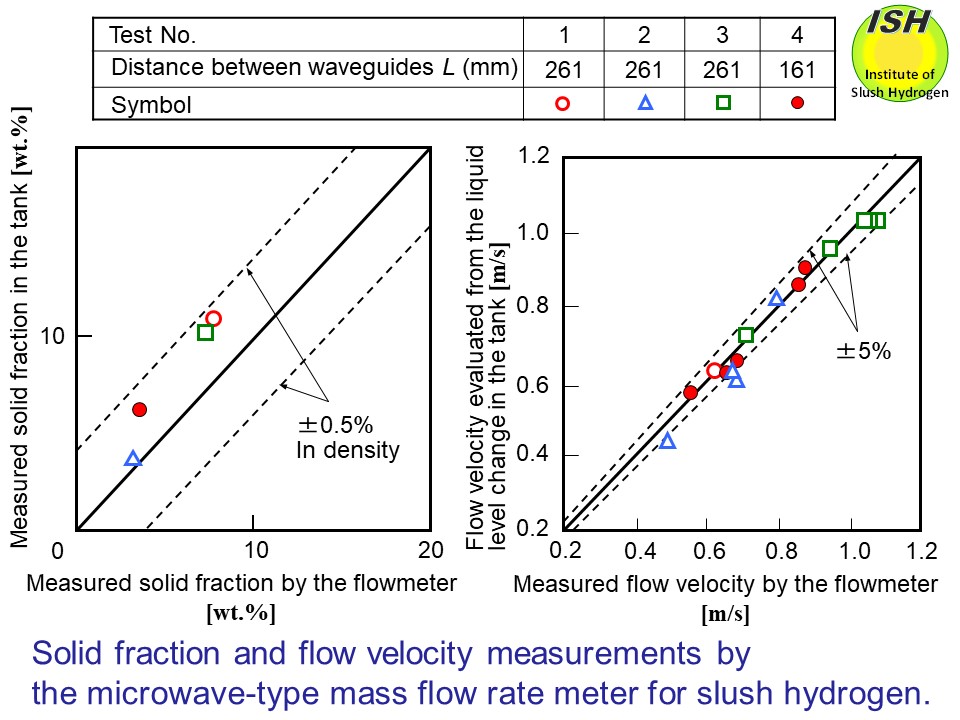